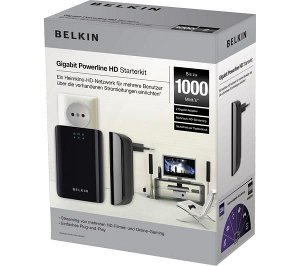 On this page we are looking directly at the observations made regarding the Belkin F5D4076, "Gigabit Powerline HD Starter Kit"; the Standards Claimed in its documentation and the interference observed from typical installations. The spectrum abuse resulting from these devices warranted singling the model out since this adapter is one of the new 300 MHz generation of PLT polluters.

These adapters arrive in a well-presented glossy box, the claimed speed in emboldened text, prominently displayed. The pictures clearly indicate the target market with a large, wide-screened TV and home cinema system pictured beside a pair of shiny new adapters.

Upon opening the box one is presented with the typical sight of a CD and the adapters, each covered with a thin, peelable protective film. The box is divided into two compartments, the lower contains the Gigabit Ethernet cables. It is not hard to see the allure if you are a videophile with a digitised collection of movies to stream over your network.

The Belkin adapters have adopted the HPA system, we will not call it a "standard" since that is quite frankly, insulting. This means that these will be backwards-compatible with the HomePlug 200 Mbps adapters already on the market and reeking havoc.

One adapter was installed at the router position in the hall. The electrical supply for this is a spur from the adjacent bedroom. This location also homes a network storage tank with 4TB of storage and contains my entire DVD collection, which is normally streamed by Wi-Fi to a PCH A100 in the lounge. The second adapter was located in the lounge, connected to the same socket which supplies the family desktop-replacement 17" "laptop".

Test 1 comprised having only one adapter plugged into a socket and energised. It was not connected via Ethernet to any clients and thus existed as a solitary unconnected device, which would poll for other PLA units with which to connect. This was done to simulate the condition that would present if the owner or another, routinely or inadvertently turned an adapter off at the mains but left another running; quite a common scenario.

Test 2 comprised both adapters plugged in, energised but not connected via Ethernet to any clients. This is the default 'idle' condition.

Test 3 involved having the adapters passing a high definition video (20GB, 15Mbps) from network storage to the laptop which played the file on its media player.

The Victim Receiver was a Yaesu VR-500 with a 30cm telescopic antenna. As with all EMC tests, the mode was AM. Some measurements were also taken using a Thurlby Thandar PSA1301T spectrum analyser and a small stand-alone DAB radio. At the shack, 25m from the house and filtered for Conducted Emissions, some observations were made with a FlexRadio Flex-5000 SDR and a QS1R Quicksilver SDR. The antennas include a broadband vertical, OCFD and confined field antenna; antennas also averaged 25m from the house.

The initial response from the Victim Receiver was a very strong signal of impulse type noise, indicating considerable field strength. The telescopic antenna had to be retracted to 10cm whilst inside the house in order to obtain a signal strength which was more indicative of the emissions, without receiver overload masking the results. In this condition, emissions were observed from the receiver's lowest operating frequency of 100 kHz and continued almost continuously to 370 MHz, only attenuated but not completely absent from around 30 MHz to 50 MHz.

Notching was in place for the HF amateur bands including 60m but appeared notably absent from the 2m Amateur Band, the VHF Aeronautical band, the DAB band, VHF FM Broadcast and Business Radio regions. Our DAB radio with a typically average signal was unable to function as intended; normally working without interruption it was unable to receive a continuous, unbroken stream and ruined listening enjoyment.

The shack radios had no trouble observing the impulse emissions from the solitary Belkin, with an average signal of -73dBm from 2.5 MHz to 28 MHz. Wideband spurs were also observed at 50.2 MHz (6m amateur band) and 70.3 MHz (4m amateur band). No other antennas were available for checking other VHF frequencies. 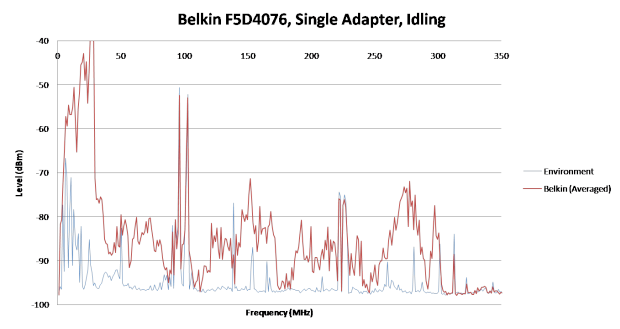 As was expected, taking sweeps from around the house, the profile of the interference altered, reflecting the reality that different parts of the house wiring were responsible for their own emission levels. As one moves, the radiated signals at any given location will combine to potentially increase or cancel depending on the mains wiring configuration and the equipment plugged into sockets at that instant in time. This will make the interference much more dynamic and less predictable than the effects we have seen on shortwave with the previous generations of PLT.

Impossible to predict in advance, radio frequency energy will be thrust in seemingly random directions, with some directions having the signals strengthened and reinforced and in others, reduced or completely cancelled. Something as simple as plugging in a kettle to make a coffee could result in sufficient emissions to block a single radio channel - or an entire band.

The Victim Receiver was removed 10m from the house and with its telescopic antenna fully extended, the emissions were observed principally from 2.5 MHz to 28 MHz and from 75 MHz to 319 MHz.

With both adapters connected and synced, there did not appear to be any significant variation from the observations in Test 1. 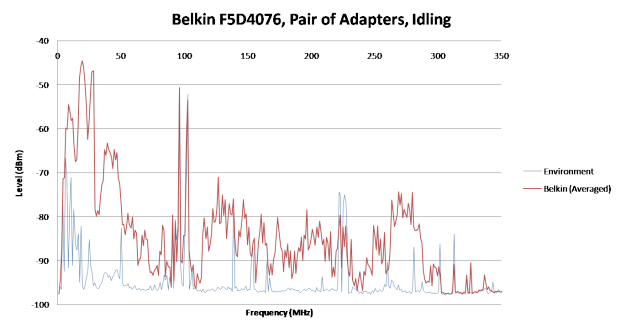 With the adapters engaged in transferring data continuously, the profile of the interference altered significantly. In this condition, the adapters continued to make the impulse popping, typical to this modulation scheme but also added to this, loud and almost constant bursts of a 'white noise scream', broken by brief intervals of up to a second or two. Whilst in full transfer, an observer with no technical background would most probably consider this as the noise floor, unaware that the prevailing signal levels are an order of 30dB or more, higher thus masking legitimate signals and the legitimate noise floor. 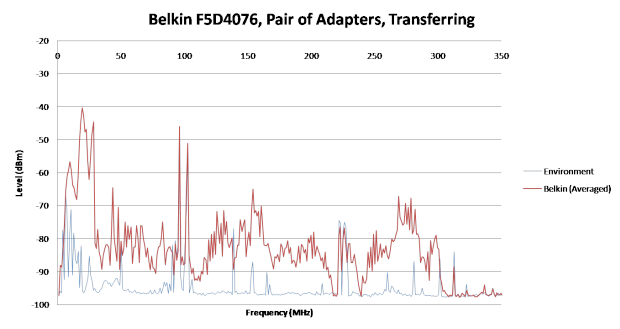 10m from the outside wall of the property, the emissions were clearly audible at a high strength from 2.5 - 28.0 MHz and from 75 - 309 MHz. The 4m and 6m amateur bands also presented with excessive noise and spurs.

30m from the outside wall of the property, the emissions were still clearly abundant across the HF range however in VHF, the magnitude of emissions were more cyclic in nature as one would expect from an antenna system (house mains) whose impedance and efficiency varies over frequency.

As the distance increases, the presence of VHF emissions diminishes slowly, since the efficiency of the radiating system will vary according to the prevalent conditions in the electrical installation. One spur was chosen at random; 290 MHz and this was still present at 100m distant from the source, with a simple 30cm telescopic antenna.

This next section comprises of comments sent in specifically regarding these Belkin adapters. They have been purchased by others and subsequently found to be not fit for purpose because they caused irrevocable radio interference and had to be returned to the retailer for a refund.

I have just received my Belkin F5D4076UK.

They indicate wideband interference of about 20dB over background noise. This antenna is about 50 feet away from my house at bottom of garden.

These adaptors will have to go back as faulty, as rendering my radio equipment unusable.

My initial findings show Ham bands notched below 30 MHz, but I find no evidence of any notching above this, including broadcast FM!

They radiate all the way to 278 MHz, where it stops abruptly, here.

Most significant is not the direct noise from the PLA, but the increase in noise floor, which cuts off at 280 MHz to reveal a noise-free band.

[The following day he also sent this:-]

My initial findings were with them idling, as one of them dropped connection without me noticing! They are very sensitive to the wiring, and totally refuse to work through 4 way adaptors (unfiltered!).

After reinitialising, I did a disk copy of a DVD from my laptop to my PC using these and the interference definitely increased right up to 280 MHz, mainly in magnitude on AM, but slightly in broadband level using my panadaptor of about 3dB.

My two radios are a handheld IC-E7, and an IC-R7100 with and external 2m/70cm dual band horizontal at about 30 feet from side of house.

While tuning through HF, notching is clearly evident with a tuned multiband vertical about 50 feet away from house. The picture shows how sharp the notch is from 27.9 to 28.0 MHz.

Above 30 MHz I could not find evidence of any notching, even broadcast FM, and between the stations the "motorboating" can clearly be heard. On weaker stations it can be heard within the sound of the station.

It is clearly evident in 50 MHz, 70 MHz 144 MHz and the VHF Aeronautical frequencies. I will check out the DAB frequencies, and any other bands that might be affected over the weekend.

The "motorboating" sound is constant, even at idle or if only one device is plugged in right up to 280MHz.

A pair of these 1 Gb/s adaptors came today.

Firstly, I powered one unit. Strong pulses a bit like ignition noise on HF, extended a fair way outside house perhaps a bit stronger than the previous HPA type. The receiver noise blanker would deal with this OK but only on an unoccupied frequency. Any signal from weak to 5/9 + 10 dB was marred and several types of blankers were of little use; more or less the same as I found before with HPAs.

The VHF pulsing extended to about 298 MHz.

The DAB band is not notched. It could be heard between multiplexes, DAB reception was not affected however the legitimate DAB signal is very strong here. I tried a 50 MHz and a 144 MHz dipole in the garden but had to be within 10-15 feet of the house wiring to hear anything.

Then I plugged in a second unit and when they found each other the pulsing reduced a good deal.

Next I used them to replace the Ethernet cable between the router in the front room and the back room where the computer is. At HF the pulsing was replaced with bursts of loud noise and a few clicks. Strongest noise was about 17 MHz.

I tried the PLA in my most awkward socket which had defeated the Comtrend. The Belkin worked OK and the LEDs showed the link was alright. TV download was fine but interference increased a bit but still a lot less than the others. I could still hear the pulsing on VHF but no sign of data, suspect unit only making use of HF. Pulsing returned if one unit unplugged.

Tried it at a house about 10 miles away where local FM is still strong but not overpowering. Can now confirm that FM radio is not notched! It could be heard on weaker and medium strength stations on a set with its usual wire aerial in the back.

Good news for "five meggers", they are notched there as well as standard HF ham bands.